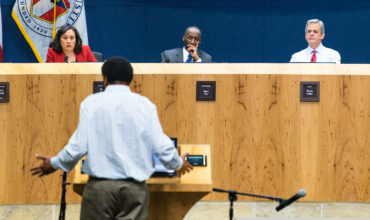 What Goes Wrong When Some School Board Members Don’t Understand District Finances?

It’s happening all over the country: a district’s proposed budget includes financial decisions the board would rather not make – reducing staff, shrinking programs, or lower-than-desirable pay raises. When it comes time for the budget vote, a few board members reverse the unpopular elements.

Here’s the problem: Too often these hasty financial directives are made late in the game and without identifying responsible budget-balancing alternatives. As school lets out for the summer, the revised budget gets signed without taking stock of the effects on tomorrow’s students.

These kinds of decisions, even when made with good intentions, can result in financial mayhem for districts.

Right now,  the lack of expertise when it comes to understanding the ramifications of fiscal decisions is especially problematic as boards wrestle with the pressures of enrollment declines and inflation, and the temporary nature of federal relief funds.

Take Aurora, Colorado, where leaders knew the district needed to downsize. But when it came time to approve a budget with fewer staff to fit the smaller student body, several trustees voted “no.” One worried cuts would be unfair to teachers. Another acknowledged that she didn’t understand what a “no” vote meant for the district’s finances—but voted “no” anyway (and then asked for some finance training).

Similarly, in El Paso, when the Ysleta Independent School District (YISD) budget landed on the board docket, one trustee called for an amendment to award even larger raises and bonuses than proposed. The audience erupted in cheers. District leaders scrambled to update their projections during the live meeting, anxiously warning that such a move would result in a $10M deficit (which they noted  is the equivalent of 160 positions). The motion passed anyway. One trustee then acknowledged that “at some point we’re gonna have to come back and have a hard discussion about…the impact of things.”

Hard discussion is right. When board members agree to spend more than they take in, they have even less to spend down the road. With some 80-90% of budgets going to labor, there are no easy choices.

For now, temporary federal aid is delaying much of the fallout from imbalanced budgets. But relief funds last only until  September 2024, at which point these decisions will make it difficult for many districts to pay their bills. When their budgets get out of whack, districts tend to burn through their reserves, eliminate school days, and make sharp reductions in staff, programs, and services. Some will see their credit ratings suffer or be subject to state takeover. The resulting financial instability can last a decade or more.

When Richmond Unified (California) went bankrupt years ago, a grand jury blamed the school board for failing to exercise “prudent control of finances.” Their mistake? Board members succumbed to “a large dose of wishful thinking” when acquiescing to pressure from labor groups.

Fast forward to this spring and the re-named West Contra Costa Unified is again a financial mess. Facing steep enrollment declines and overspending, district leaders proposed issuing tentative layoff notices in case cuts must be made next year. Three of five board members voted no. With no other budget-balancing mechanism in place, county officials were sent to provide financial oversight. As one official explained, the district is “in a harder spot now than they were because they did not do what they needed to do.”

I’m not suggesting that board members avoid participating in budget decisions. Boards, after all, hold the fiduciary responsibility for the district. It’s their signatures that authorize spending. Rather, the financial whiplash happens when an ill-informed board member ignores months of budget development – often involving a more financially savvy subset of the board – only to intervene in the final hour with a directive that throws the budget woefully off balance.

While these moves generally don’t stem from bad intentions, they do often reflect financial ignorance. In the Richmond case, the grand jury report noted that even well-educated board members “lacked adequate expertise in the management oversight of a multi-million dollar enterprise.”

It’s clear that some of that financial ignorance comes from a lack of familiarity with what the numbers mean for the schools under their watch. Last month the board in Green Bay, Wisconsin, approved new hires even as the district faces a projected $36 million deficit when federal relief ends. In response, the school board president said, “These numbers are kind of scary.”

Scary indeed. There’s no doubt that budget documents arranged into fund, function, and object categories are anything but intuitive. But like it or not, it’s the responsibility of board members to learn the finances and become better stewards of the public funds spent on behalf of their students. Board members who lack the financial fluency to do so can seek the expertise of consultant firms, or participate in financial training.

That also means coming to meetings prepared. In a spring budget meeting in San Antonio, a trustee struggled with why the district hadn’t put forth larger raises. Finance staff pointed to board documents outlining how larger raises (coupled with enrollment and attendance declines) would worsen the district’s cumulative deficit. At that point, some trustees could be heard shuffling through the detailed board documents that contained the answers to their questions. One trustee shrugged off the figures, asserting there was “no way of predicting what was going to happen in the future.”  In the end, a majority voted to override the district’s financial controls to approve a larger pay hike (with no plan on how to pay for it).

Who pays the price down the road? In the Richmond case, the jury found that the “price is paid largely by the students of the district.”

In LAUSD, that price comes in the form of shortchanging each student by some $450 per year. That’s the excess cost of absurdly generous health benefits when compared to other California districts. When it came time to revisit those commitments in 2018, board members acknowledged the costs were threatening programs for students, and then voted 4-3 for a plan that avoided any substantial changes.

Money spent on one thing means it can’t be spent on another. In Ontario-Montclair, where the board approved an irresponsible $700,000-plus superintendent compensation package involving the purchase of a condo, that money won’t get spent on students.

In some districts, this over-spending means that relief funds are backfilling budget holes instead of being used to remedy deep learning losses. Left unaddressed, those pandemic gaps amount to “the largest increase in educational inequity in a generation.”

Chances are it’ll only get worse with time. Randy Layman, a director for S&P Global Ratings who specializes in credit ratings, warns that federal aid may only “mask financial troubles temporarily.” That means down the road, today’s commitments become tomorrow’s debt burden, resulting in higher interest rates on borrowing, deeper spending cuts, and fewer choices on how to deploy available funds.

Some board members see it coming. An El Paso Unified Trustee admits that the 2025 looming deficit “scares the bejesus out of me.”

READ THE COMMENTARY ON FORBES